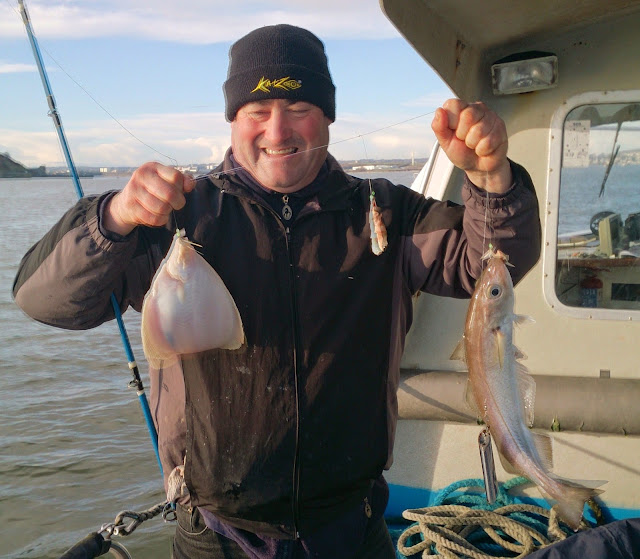 The ever popular series of Light Lines competitions are back!!!!

Well it's that time of year again; the start of winter, which heralds the influx of codling, whiting and dabs into Cork Harbour. So if you were thinking of mothballing your fishing gear for the winter, then DON'T!!!

Instead, head out fishing with Cobh SAC. The winter series of the ever popular Light Line competitions are starting again and will run right through the winter months until next April.

These competitions are for everyone; whether you're a seasoned angler or a raw beginner. In fact, if you are a novice it’s no better a place to cut your teeth in boat angling. These are fun competitions where everyone is quite willing to help out each other and you can get great advice. Not that there isn't a competitive side to these matches as well as some of top rods will be slogging it out to be the Light Line champion over the season….and there have been some notable champions over the years including Irish internationals Padraic Clear and Paddy Swan. 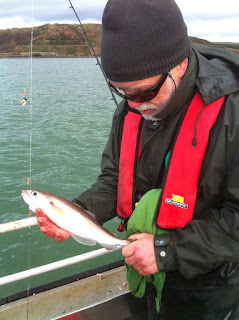 The first of this winter's competitions is on Sunday the 15th November 2015 (HT 07:11 4.0m). If you'd like to fish this one then book your place with Pat O’Shea Cobh SAC, on 087 – 2532610 (email – patosheacarriglen@gmail.com) or Mary Geary Cobh SAC on 021 – 4812167 (seaangling@esatclear.ie). Book early to avoid disappointment. These comps are very popular and can book up fairly early. Make sure to get your entry in before the close off the Weds evening before the comp at 6pm. 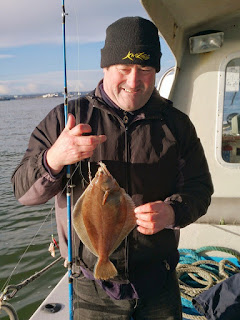 The scorecard used is the same one used for the Boat Fish-Offs and the fishing will be broadly similar. However, the format is much simpler and the rules are kept simple. There will be only one change of positions in the boat; basic IFSA rules apply e.g. you are limited to three hooks. The only stipulation is that your main line is of 15lb b.s. or under. Shockleaders, main rig bodies, and snoods can be made of any breaking strain. There is no restrictions on bait. The rules are kept as simple as possible as it's meant to be a fun competition; a fun day out. In fairness the craic can be mighty and the slagging something to behold!!!

You can fish one competition or you fish them all. If you fish every comp then you'll be entered into the overall series. Your best scores from 5 comps will count (you can drop your worst score). Last year it was, yet again, a very close run thing; Terry Boyle, Padraic Clear, member of the current 2016 Irish World Boat Championships Team, and Pat O'Shea, Cobh SAC, were all in the reckoning upto the last day....it was that close! Padraic Clear won out in the end and will be back this year to defend his title.

This year we are delighted to announce that Shamrock Tackle have come on board as the main sponsors and are joined by the Commodore Hotel. Shamrock Tackle will be supplying many of the main prizes including Artico Rods, Fixed Spool reels and others. Watch this space!

For those anglers travelling and wishing to stay over, the Commodore Hotel are providing preferential rates. Just contact Mary O’Mahony on 021 – 4811277 or email commodorehotel@eircom.net and quote the Light Lines. 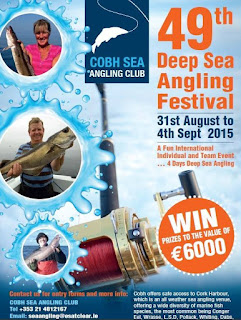 Posted by Cork Harbour Angling Hub at 6:12 AM 1 comment: 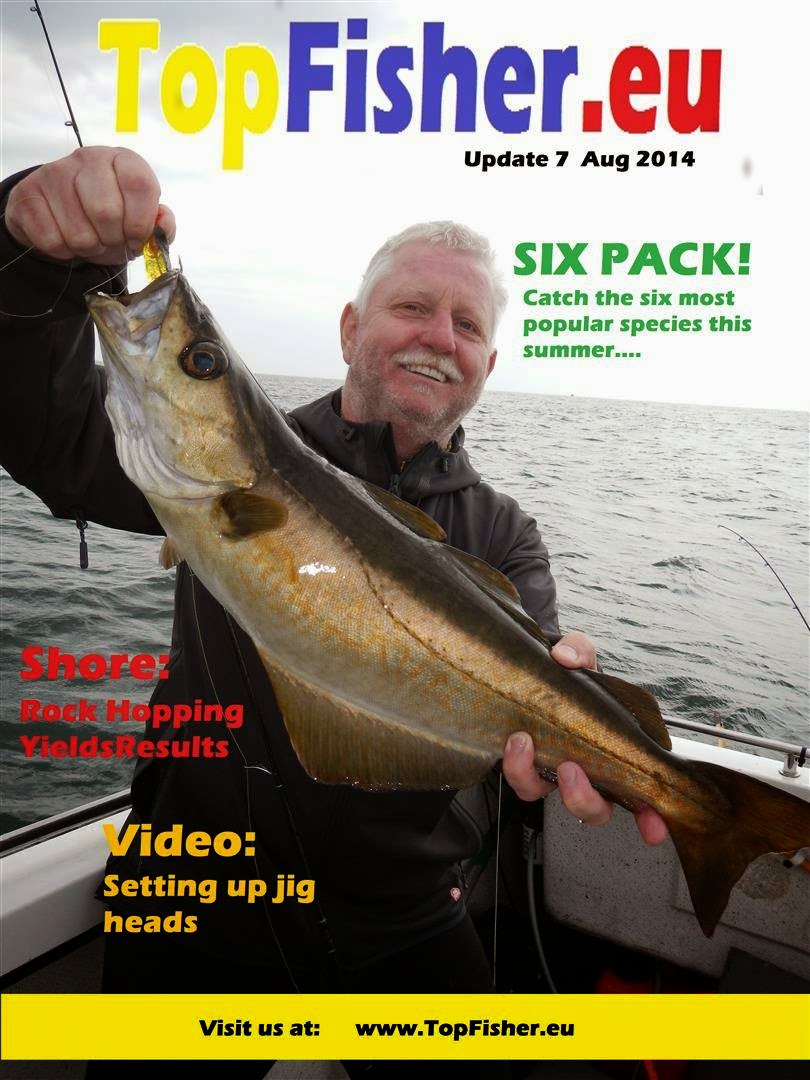 A great new online sea angling magazine has been up and running for the last number of months.The brainchild of Irish Angler journalist, Jim Clohessy, the magazine is FREE and features monthly contributions for some of Ireland's top angling journalists and a number of foreign guest entries. In fact there has been over 50 articles to date and they have been superb! From great practical advice to great fishing adventures, this magazine has it all....and you'd expect nothing less from Jim, a top notch small boat angler in his own right and now widely recognised for his expertise in soft plastic lure fishing. Jim is one of the best known practitioners of the sport in Cork Harbour. Well done Jim, keep 'em coming!!!

Have a look for youself, here's the link for the latest edition TopFisher.eu

If you'd like to subscribe for monthly updates then follow this link Email Update. Of course you data will never be passed onto a 3rd party.

Posted by Cork Harbour Angling Hub at 5:12 AM 2 comments: 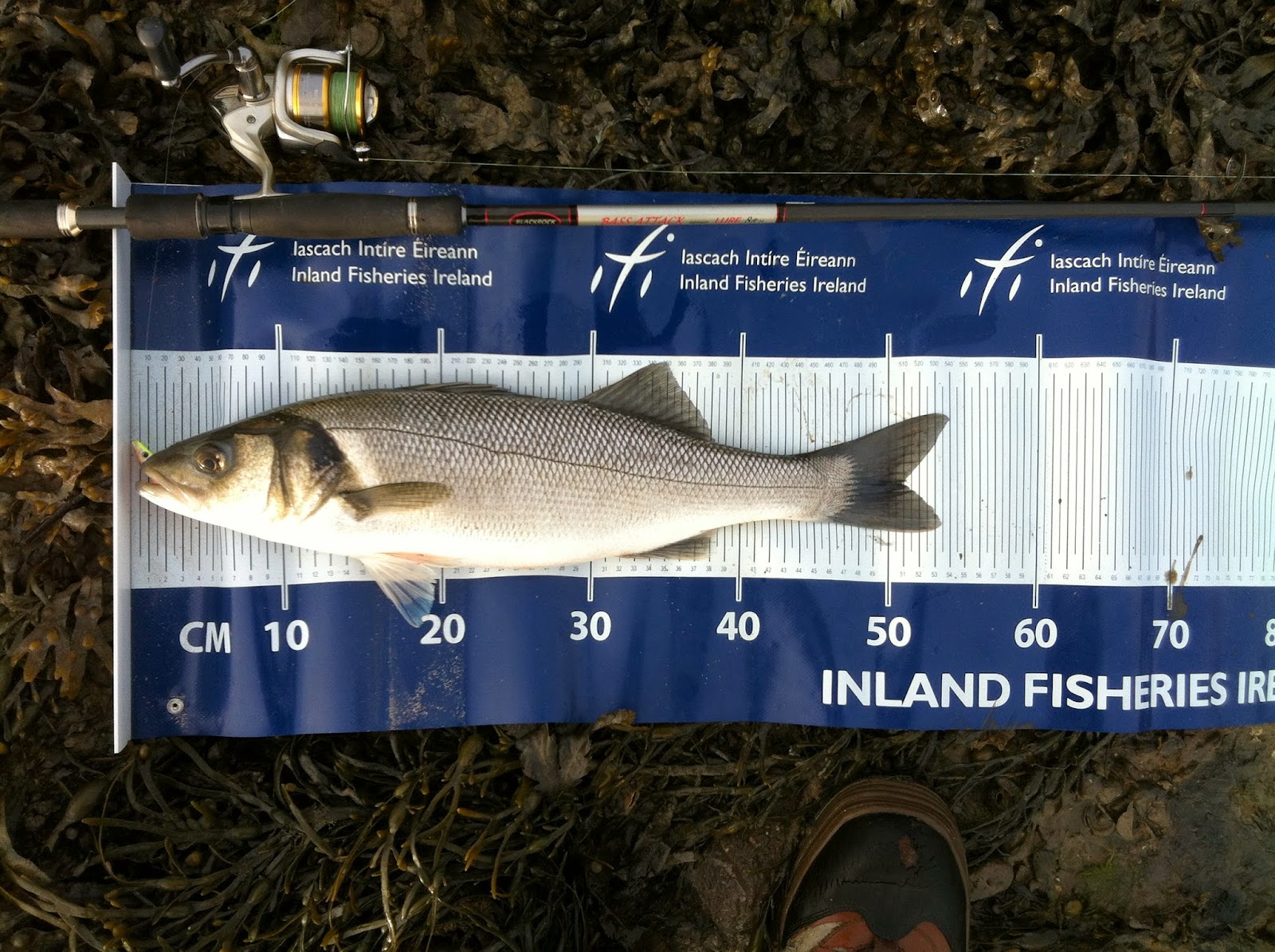 After an absence of 4 months, this blogger is back!!!

Due to study and exams I haven't had the time to update the blog, but now's the time to catch with all those local sea angling reports.

Over the next few weeks I hope to update you of what's been happening in Cork Harbour fishing circles. The word is that its been a good season so far!
Posted by Cork Harbour Angling Hub at 8:08 AM No comments: 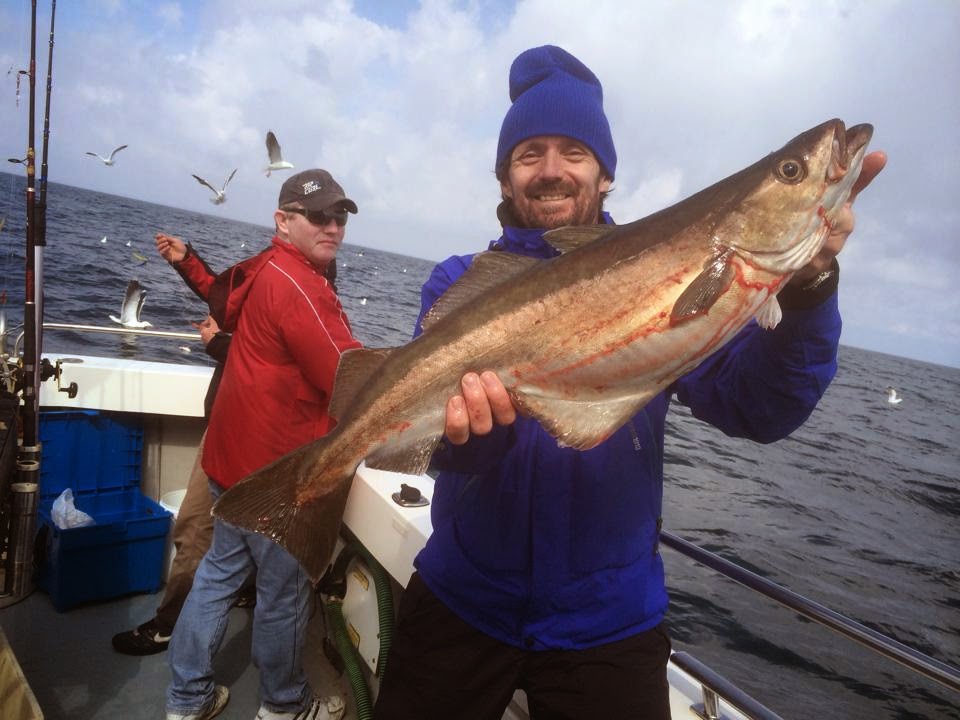 Skipper Gerry Keohane, of the Naomh Cartha, availed of the good weather of late and reports on some cracking pollack fishing. Biggest pollack of the day was this fine specimen of 15lbs. Fish like that are few and far between and even to get a specimen pollack these days is a rarity. Well done Gerry!!! 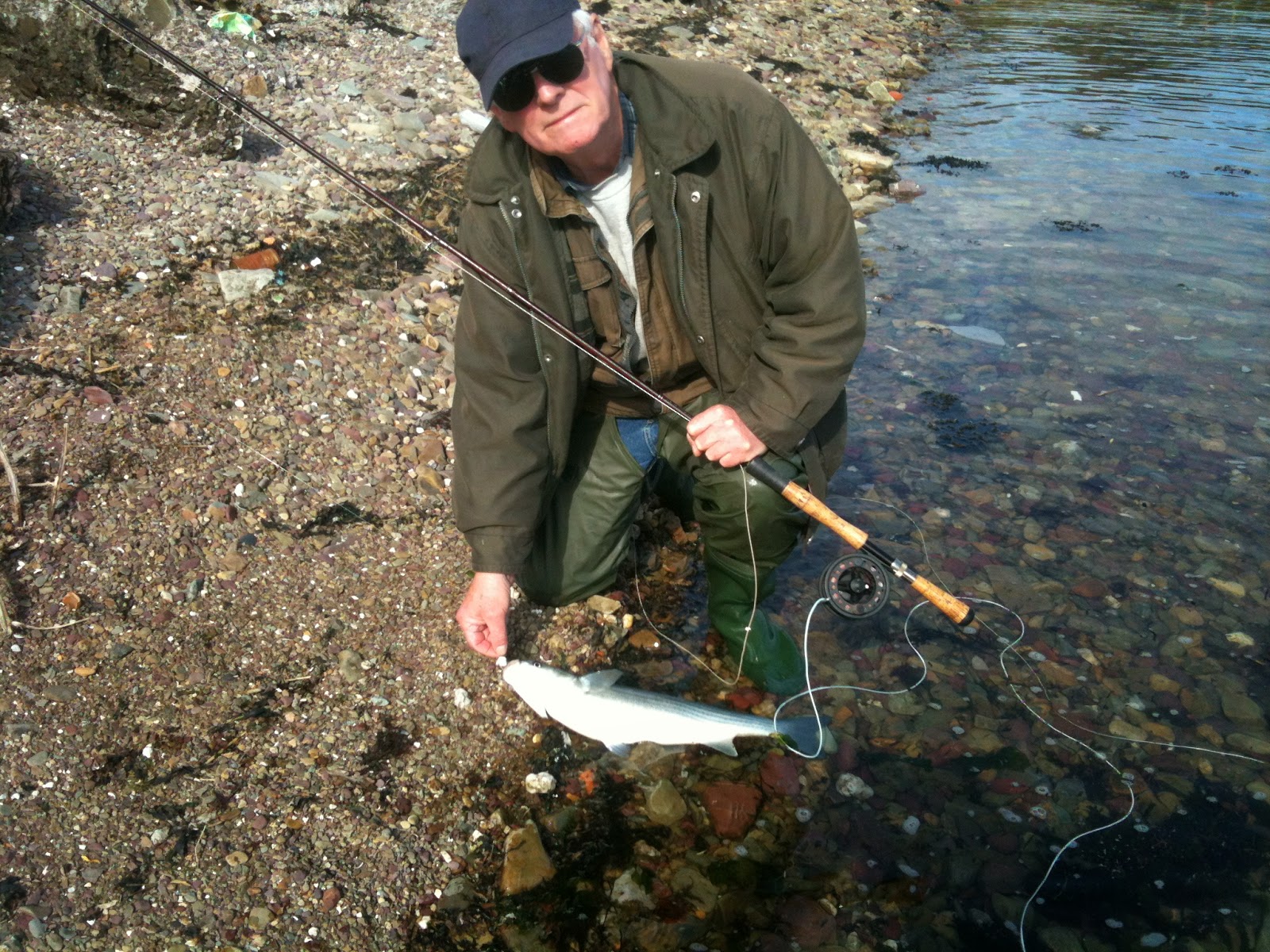 Fly fishing for mullet can be a frustrating and infuriating experience says saltwater guide Richie Ryan. 'Its hard enough to catch the Grey Ghost using traditional methods but is much more challenging on the fly. The mullet were late in to our estuaries again this year. Some fly anglers look forward to catching their fish in the first few weeks of the year as the mullet appear much earlier on the South coast.'

Richie introduced his good friend Kevin McLoughlin to the vagaries of saltwater fly fishing a few years ago. Having been a superb fresh water angler, he made the switch easily. Kevin was keen to master the art of catching a mullet on the fly. It looked easy, there were plenty of fish, what could go wrong. It was a difficult journey, but catch he did. Kevin researched the internet and has become our resident expert on fly fishing for mullet. So much so that he predicts mullet on the fly will be huge in the future. Richie agrees wholeheartedly with Kevin. Watch this space.

Kevin is seen here with a mullet in superb condition hooked on the Myles Kelly Fly. If you'd like a day out fly-fishing with Eire Bass guide, Richie Ryan, then give him a buzz on 00-353-86-1940744. Alternatively, check out his website on http://www.corkbass.com/

Posted by Cork Harbour Angling Hub at 6:51 AM 1 comment: 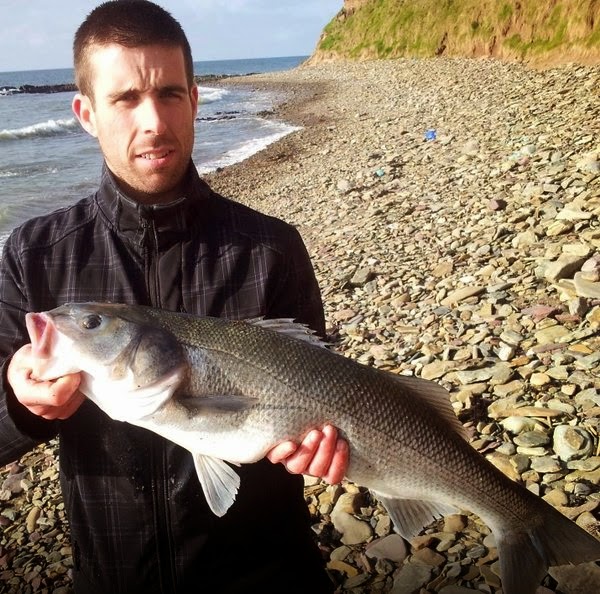 Well its been an amazing week on the bass fishing front on the outer harbour marks. Not only have the bigger girls arrived, with plenty of fish in excess of 60cm, but there have been reports of three doubles in the space of a few days.
Gavin O'Connor took a break from his exploits in the Light Lines competition and went back to his first love, lure fishing for bass. On Monday he availed of the good weather and targeted the silvers from a favourite mark of his. Although, the fishing was slow he did capture a fine bass of 75cm on a Feed Shallow lure. Later in the week he returned to the same spot and went one better with this fine 79cm fish which came in at 11.5lbs. The plug that did the damage was once more the Feed Shallow.

Not to be outdone, local lure hotshot, Clinton Rachman, targeted some bass on a night fishing sortie. Clinton has been picking up a few of late, all falling to his favourite South African lure, the 'bass bomb.' However, he really nailed it with this fine 79cm fish caught at a low-water mark. The fish is estimated at 11lbs. Clinton didn't weigh it as he had no scales with him and was anxious to get the fish back as soon as possible. These lures are really deadly, have a look here for further details https://www.facebook.com/BassBombs 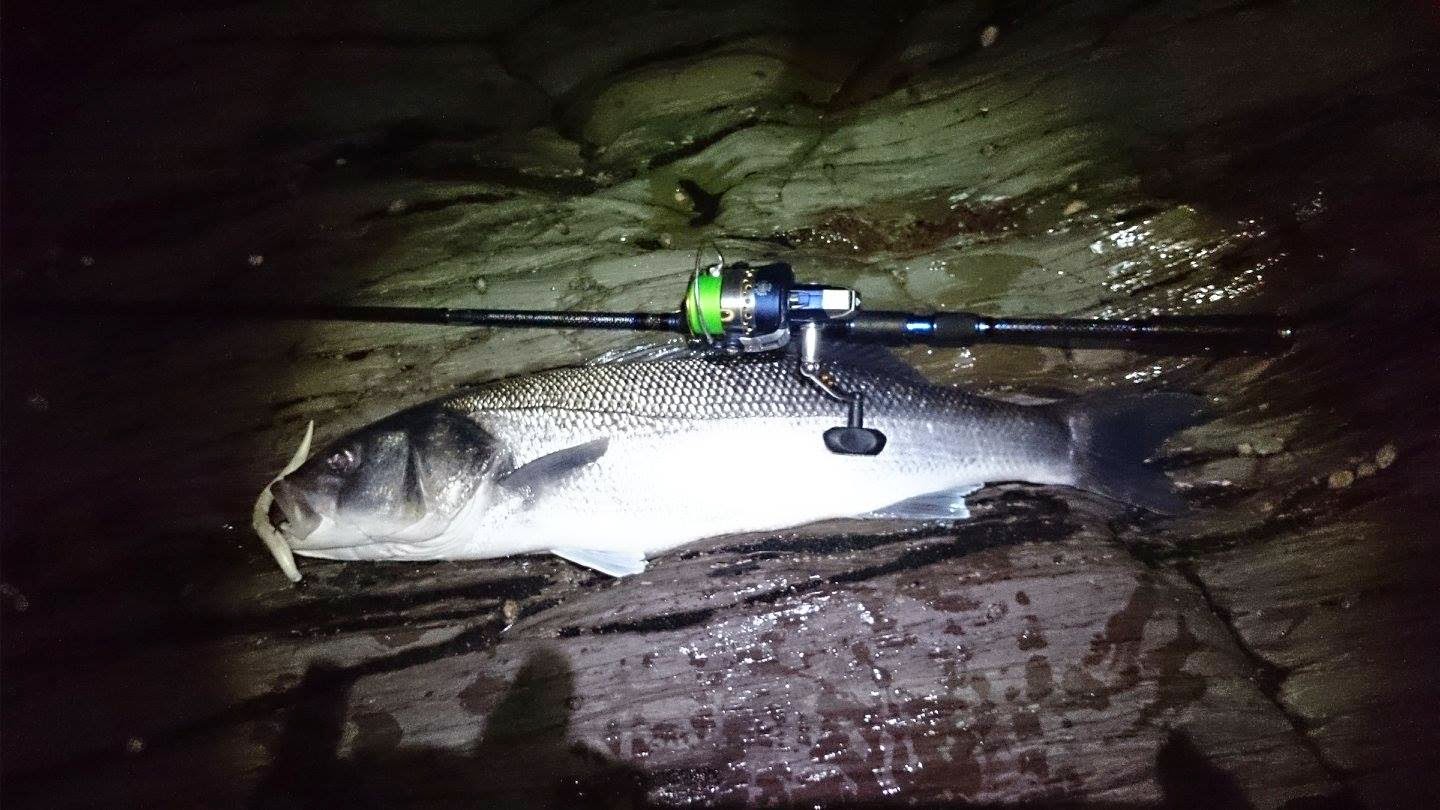 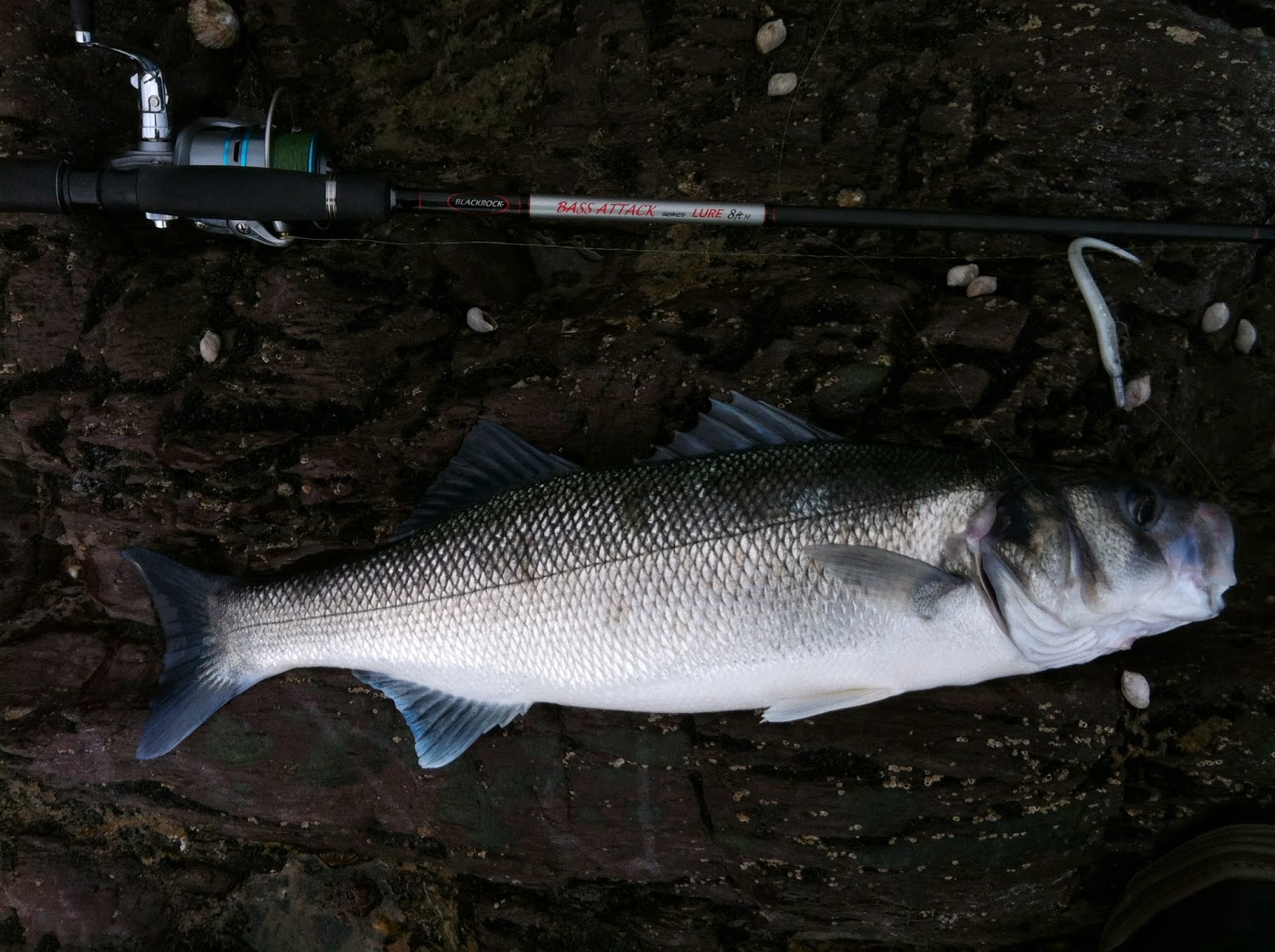 Posted by Cork Harbour Angling Hub at 5:51 AM 3 comments: