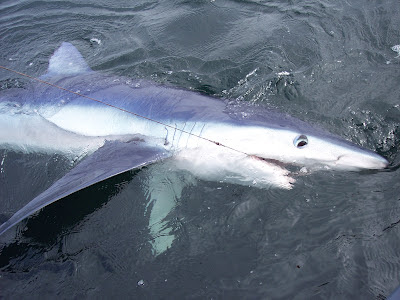 Donie Geary, skipper of the John Boy, recently ran into the 'blues' with a group of UK anglers. Blue shark haven't been showing in numbers off the harbour as of yet and Donie was surprised that they ran into a number of them. Here's Donie's report:

'On Saturday morning, a day with beautiful sunshine and no wind, we headed for an area north of the Ling Rocks. The five English anglers on-board wanted to do some species fishing and this is normally a good spot to ratchet up the species numbers. We started our drift 2 mikes north of the rocks. A couple of boys asked if they could put out a shark trace while bottom fishing. With this in mind I set up 3 rods with shark tackle and balloons, while the lads got stuck in to the bottom fishing. I then set up a fine bag of rubby dubby with some mackeral left over from the previous day, some bran and some fish oil from last year. I wasn't very optimistic about our chances as I hadn't heard of any blues being landed this year and, also, the mackeral had been very scarce. The bottom fishing, however, was good and getting better as we drifted slowly towards the rock. The lads were landing ling, pollack, haddock, whiting, coalies, cod and some lovely red gurnard (which I had for my dinner that evening).

At about 2 O' clock we were only about a mile off the rock when the tide turned and we began to drift slowly back in the direction of Cork Harbour. The bottom fishing was so good that the shark rods were forgotten about until one of the ratchets screamed off. Everyone rushed to get all the bottom gear in to give the shark a clear run. However, after the initial run he lost interest and came to the surface for a look around. After about 20 minutes Barry's rod took a good run and this time the fish was hooked. After about 30 minutes of gentle coaxing on 30lb braid, an elated Barry boated his first ever blue shark of about 60lbs. 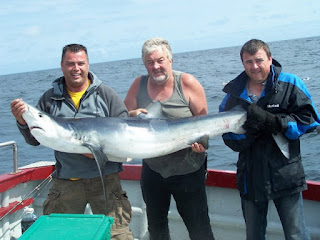 Steve and Paul had unsuccessful hookups before Barry again had a mighty scrap with a fish of 80lbs. Again this fish was photographed and released back into the water. After that we had no more interest but, nevertheless, I arrived back at the pier in Cobh later with five very satisfied and thirsty anglers.

On Sunday the weather took a turn for the worst so we decided to stay within the shelter of the harbour. We had a very relaxing day. The fishing was poor. We were fishing an ebb tide for most of the day. Between cups of coffee and plenty of jokes we had a number of dabs, whiting, and dogs. Before the day was out we also had three blonde rays, which put the icing on the cake for five very happy customers.

On Sunday night we met up again in Paul's (Ryans) where post-mortems were held and, more importantly, dates were decided for a return in 2013.'

If you fancy a trip out with Donie on the John Boy you can contact him on 00-353-87-2776566. Alternatively, check out his website on John Boy for more information and contact details.